Bathroom Guide-Wall Mixer vs. Diverter- What To Buy?

The contemporary bathroom designs would be never complete without the Installation of a few main elements such the wall mixer or the diverter! It not only allows one to switch between different components such as the handheld shower and the standard shower head but also comes up with various other add-ons like the temperature control. To avoid double fitting attachments and to have the best of both worlds make sure to utilize these faucets.

Wall Mixer: It is a single unit fitted on the wall, with a common spout attached to the hot and cold water supplying knobs together, which allows to draw water from both the hot and cold sources and combine it into a single flow, to come out of a single spout.

Wall Diverter: Whereas the diverter units functional parts gets concealed inside the wall and only the lever, spout and overhead shower would be visible. The spout and the knob are different parts, unlike the wall mixer, hence look more compact and space efficient. Since all the functional parts get concealed in the wall, there’s only an aluminum sheet with a lever and depending upon the types of diverter and feature requirements, water flow from sources can be controlled. And while planning modern bathroom these fixtures are very much part of the bathroom design. 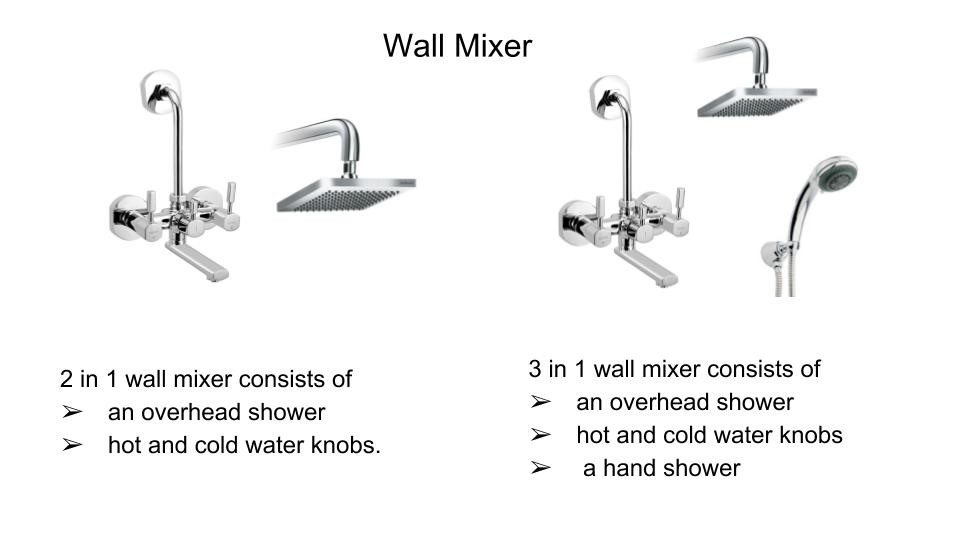 The  Two Types Of Wall Mixers:

2 in 1 wall mixer  consists of 2 features

3 in 1 wall mixer consists of 3 features

The Four Types Of Diverters With Its Features:

●     One way:  controls one component like the overhead shower.

●     Two Way: controls two components like the overhead shower and the hand shower

●     Three Way: Its three-way design allows to control of up to three separate components

Advantages Of Using A Wall Mixer

●     Wall mixers are the best replacement for traditional full turn taps.  Here the ‘’full turn’’ on and off taps have been replaced by quarter turn knobs which are more durable.

●     It allows to switch flow between the taps and a shower attachment or between the overhead and the hand shower and is particularly useful where there isn’t room for a separate bath and shower enclosure.

●     Wall mixer is installed on the wall therefore, the unit can easily be changed or repaired when needed.

Advantages Of Using A Diverter

●     A diverter is installed inside the wall and hence, best suits the minimalist bathroom interior style or the spa-like bathroom.

●     Even the diverter allows switching flow between the taps and a shower attachment or between the overhead and the hand shower so can be considered a good replacement for traditional full turn taps.

No matter what home dwellers buy, be it wall mixer or diverter, we suggest you to buy a branded unit which is available in various designs and style and looks quite trendy and stylish. Just make sure to choose the style that matches the bathroom interior style and budget.

Lastly, take a read of the most important Bathtub vs. Shower, Which is Perfect for Your Bathroom?

Style Up Your Bathroom with These 10 Modern Vanity Designs

Though bathrooms are an important category of spaces in any…

How To Select The Most Suitable Bathroom Vanity?

While planning a bathroom, do make sure to include the vanity, as the…

Things you must know while planning Modern Bathroom

Generally while planning a house, we think about how our bedrooms…

Expert Speak: How to Modernize your Outdated Bathroom?

Are you looking out for ways to give your bathrooms a makeover, but…

Bathroom Guide: How to Choose the Right Faucet with the Right Basin

A Comparative Analysis Between Modern, Contemporary and Traditional Furniture

5 Easy Hacks To Make Your Living Room Bigger AND Better!

Add Charm To Your Home With Different Style Of Furniture

Pro Tips- How to Complete the Project within Budget

Project fruition is all about keeping with the estimates and budgets…

How Important is your First Architecture Job

“Your first architecture job is important.” Talking about this, it…

Should you Hire an Interior Designer or Decorate on your Own?

Interior designing is a recent concept. Earlier, it was considered a…