Michael Weinstock, an Architect and an Academic, pens down an inspiring book describing the evolution of cities and architecture. Quite distinguishably, he brings out his thoughts and a different perspective of how everything that grows on the planet has an ecological balance and interdependency. And how we, the homo-sapiens and our perception of being more substantial, have ruined the balance. Architecturally, the book discusses and tries to prove that it is a part of everything that is around and its evolution is as natural as any organism on earth. In a broader overview, following are the heads that the book emphasizes on:

Humans and the ecological developments go hand-in-hand, one cannot occur without the supportive nature of the other. All the cities started due to the vicinity to sources like water, or food. Civilization like Harappa is quite an evident example of it. The book tells that the major cities today have a resource around and have thus, developed over the years. But ecologically, the book shares the examples of how the development in the cities today has royally ignored the ecological balance and yet is also unaware of it.

The book challenges the theories of the cultural and architectural developments. The history that might be thought to be true has been questioned in the book, and Michael Weinstock with various graphic examples, tries to co-relate the growth of cultures and architecture with the growth of its surrounding and the natural flora and fauna. It emphasizes that the cities which have organically grown are influenced by the circumstantial growth pattern of other beings around it. Many planned cities have tried to renew the growth pattern and have eventually suffered with lack of it. 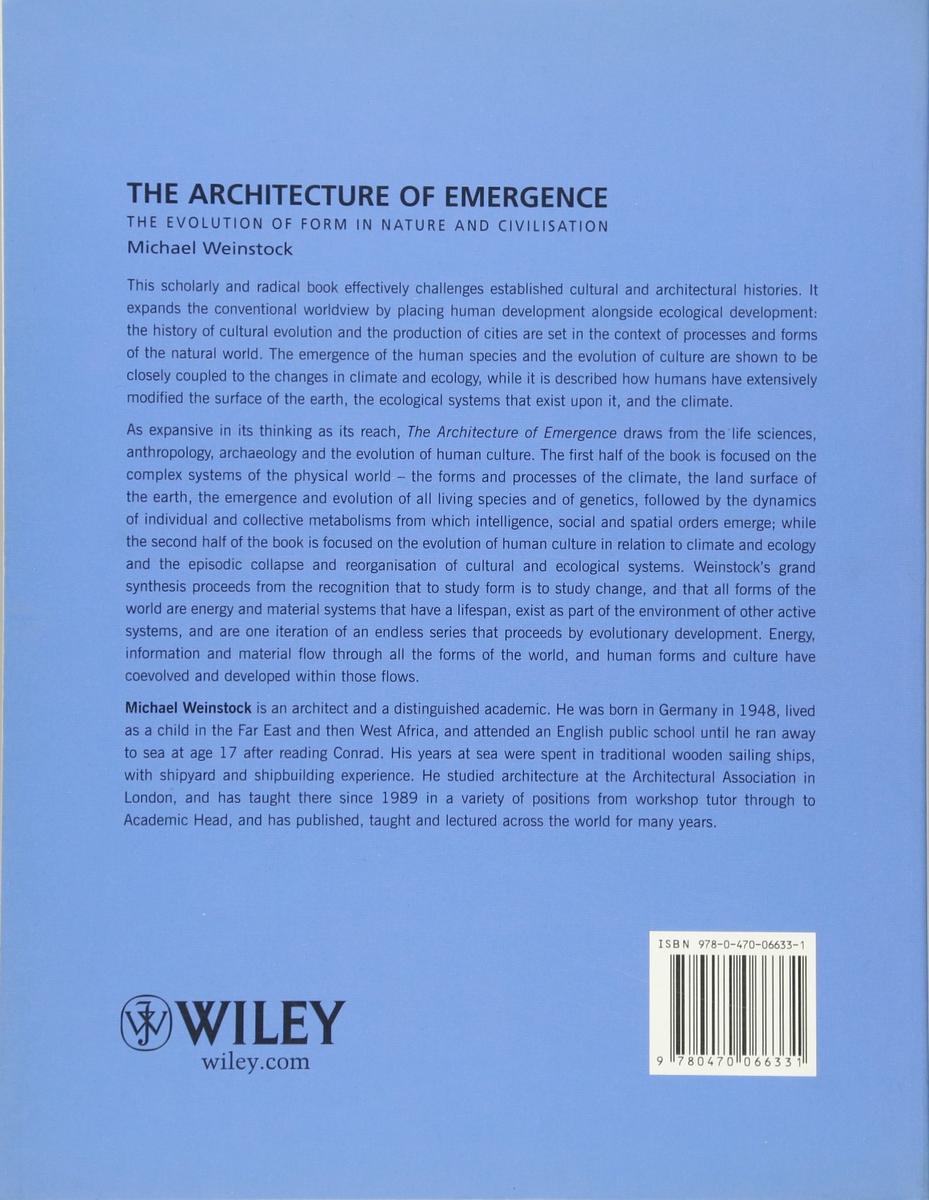 Both these disciplines, deal with the study of human past and its origins. The association with the cultural backdrops that we have, from these professions’ point of view is one of the major topics that the book tries to put on the foreground for its readers. It relates the two and helps in giving a better understanding why we surface the kind of façade today and how it extends to the way we build or are still building our cities. The materials and the forms, how they have evolved over a certain period of time. The changes in the human structures are no news in today’s times, our lifestyles are emerging differently than before and we are continuously adapting. Thus, the process itself becomes varying and so does the end result.

There is always a pattern of the blooming of every organism, no matter how big or small. These patterns over the years have been studied by various experts in the different fields of science, and even humans aren’t aloof from the growth pattern. But the social orders are different for everything that exists, or tries to co-exist with the present forms. The author pens down the theory that all orders that prevail can be distinguished in the way of the intellectual growth of the being, the social surroundings and the spaces and places around it.

The author very intelligently connects all the dots and relates that architecture is indeed the sum of all the sciences, arts and cultures. It isn’t the discipline that can survive solely on its own. It is always greater than the buildings or the structures that we think are a necessity, rather it is the basis of all lives that have or will sustain, and so it becomes a responsibility to see the whole picture instead of a part.

As the name of the book suggests, it is the whole and a sorted guide…

Penned down by Professor Banister Fletcher and later editions by…

Perspective in the literal sense means “true understanding of the…

Donald Watson, an architect having a private practice and Michael…

9 Bright Colored Kitchens to Buck you Up

How do I Choose the Best Color Scheme for Bathroom?

Be it for brand new bathroom designs or budget bathroom remodel…

5 Easy Hacks To Make Your Living Room Bigger AND Better!

Everyone would love to have the beautiful living rooms that gets…

When it comes to designing a kitchen, it is not only about picking a…

When Furnishing Changes the Look of your Bedroom

Ever wonder how your bedroom gets that extra oomph from? Look around…

The trending field of design, these days, is one of the emphasized…